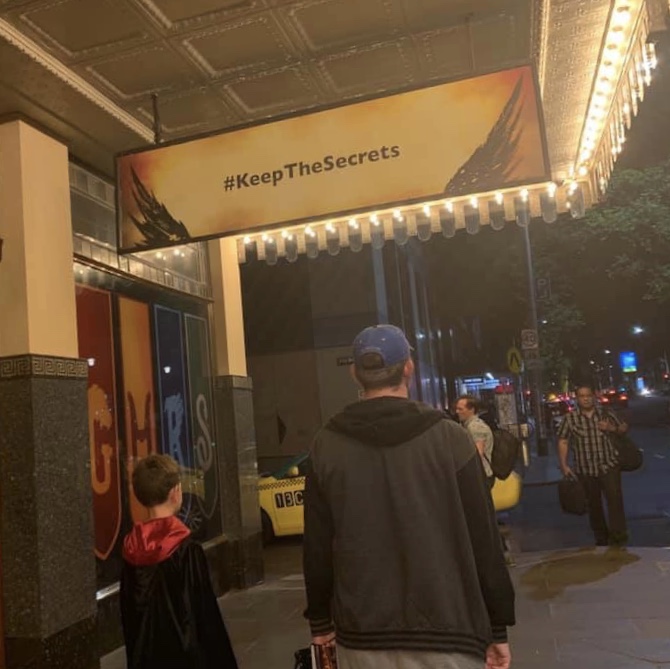 We were lucky enough to be 2 of 700 people to get tickets to the final dress rehearsal of the Melbourne production of Harry Potter and the Cursed Child.

The play was performed over two nights (16th & 17th January). Since it is the Harry Potter universe presented on stage it was absolutely chock a block full of magical theatre effects. No wonder they had to renovate the Princess Theatre for the show! There are so many amazing effects throughout the show that are built into the theatre. The set remains predominantly the same throughout the show besides a few props that come on and off stage, and using lighting they highlight different aspects of the set.

It is a two part play which means there is approximately 5 hours of new Harry Potter content in the play. Although there were a couple of little segments in part 1 where I felt the talking went on for too long, all in all they kept the entire 5 hours of the play engaging. The acting was phenomenal with Gareth Reeves (Harry Potter), William McKenna (Scorpius Malfoy), Gyton Grantley (Ron Weasley) and Lucy Goleby (Ginny Weasley). Even though the characters looked different from in the movies you could see that it is the same characters presented on the stage that were in the movies. There are a few memorable characters from the movies that make small appearances and the cast of Cursed Child Melbourne does a good job of portraying them. In regards to the story, reading the script does not work well, however seeing the script come to life in a play setting just works and makes sense.

Overall, we would definitely recommend seeing the Melbourne Production of Harry Potter and the Cursed Child for a fun time full of magic. And for all Harry Potter fanatics this is a play that is not to be missed!

Are you coming down to Melbourne to see Harry Potter and the Cursed Child? Be sure to contact us to book your accommodation.