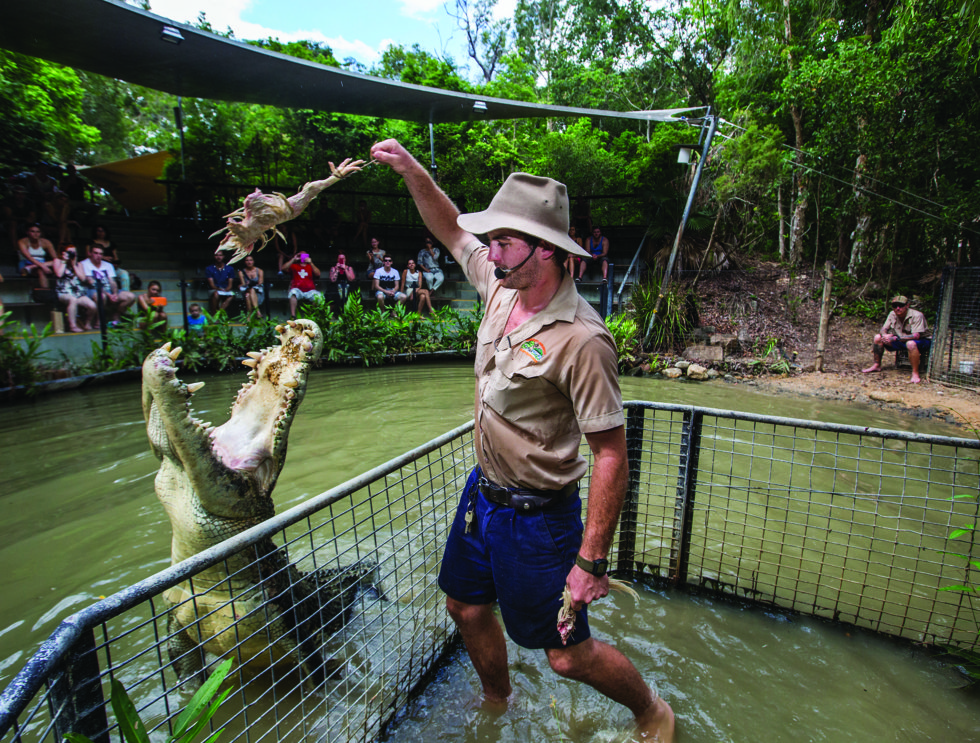 They laze in the sun for hours perfectly still like statues with their mouths wide open cooling off, prompting tourists to often ask if they are actually real. Their skin is greenish grey, hard and scaly reptilian armour. They have huge teeth, and their jaw muscles are strong enough to crush bone and exert a pressure of several tons on their victims. At Hartley's Creek Crocodile Adventure Wildlife Park, hundreds of these prehistoric crocodiles live together in a natural environment based around a wildlife park and crocodile farm for tourists to visit and get up close and personal and learn about these shy creatures.

Where is Hartley's Crocodile Adventures

Hartley's Creek Crocodile Adventures is an eco tourism award winning accredited tourist attraction that has been created on a 10 hectare World Heritage site just 40 minutes north of Cairns Queensland Australia Cairns, Queensland Australia and 15 minutes drive north of Palm Cove and 20 minutes south of Port Douglas a relaxing scenic drive for the family along the coastline at the foothills of the Mac Alister ranges. It's the ideal tourist attraction to call into for a visit if you are making the transit between Cairns and Port Douglas in a rental car.

Hartley's Crocodile Adventures is also reputed as one of Australia's longest running and most successful crocodile shows, having operated since the late 1930s as the Halfway House for travellers between Cairns and Mossman with just one crocodile named old Charlie to keep customers amused whilst waiting for tea and scones to be served. Charlie the old crocodile resided at Hartleys from 1935 sadly succumbing to cancer in 2000.

With over 2100m of easy boardwalks and pathways to follow the whole family can discover the five distinct wildlife zones of this innovative tourist attraction and wildlife park. A multi-faceted eco-adventure facility, most areas of Hartley's Crocodile Adventures can be explored independently, while others do require special transport and or a wildlife park tour guide for safety reasons. Please ensure children are supervised at all times when visiting the crocodile lagoon and pools as they may just be a bit too inquisitive and want to pet the irresistible crocodiles.

Take a boat cruise on the wetlands and try and spot the crocodiles lurking in the murky waters below. See them leap from the Hartleys' Lagoon to jump up and grab the chicken being dangled from a pole on the side of the boat. Just make sure you keep your arms inside the boat at all times as crocodiles do not discriminate on what is being offered in this lagoon at feeding times.

Cassowaries are under the threat of extinction in the not too distant future if something is not done to preserve our rainforests and the natural habitat of these giant birds. Hartley's Creek Crocodile Adventure Park has set up an informative sanctuary for visitors to explore and get to understand the fragility of our rainforests and what they mean to us as humans today and the existence of our future generations health. Cassowaries are one of the most important links in the survival and regeneration of our rainforests as they are the only animals capable of consuming and distributing large rare seeds around their habitat regenerating the rainforest as they go.

Take an intriguing journey thru the evolution of Australia's unique animals and the continent they originated from 200 million years ago where dinosaurs once roamed. See stimulating interpretive signage on all exhibitions and see the living descendants of Australia's ancient past and how they have adapted to climate change over the years.

Other Attractions in Tropical North Queensland

You have Successfully Subscribed!